So which tree species actually store the most carbon? 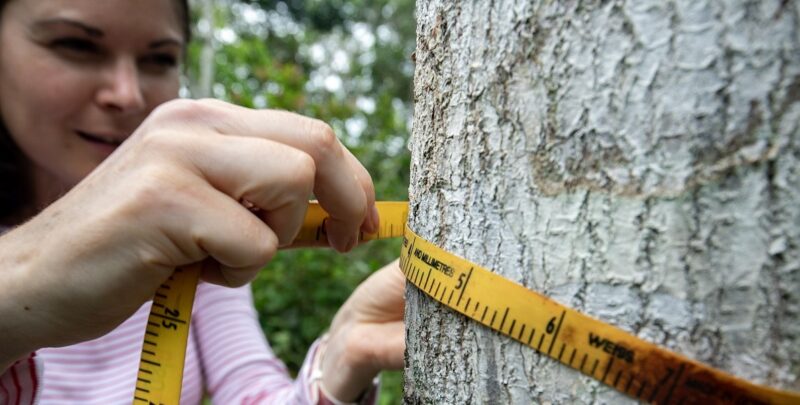 It is worth reminding ourselves that:

‘Just 1.2 acres of conifer woodland could soak up as much carbon as an average driver will generate in an entire lifetime of motoring.’

— As Amanda Saint wrote in her manifesto for the Woodland Trust.

But for tree planting to be effective, it is essential that we choose the right tree species. Even in the best locations, poorly selected trees can actually be detrimental to the environment, and may not optimise carbon capture — meaning that much of the effort is wasted.

Plant your Future has been working in the Peruvian Amazon for a decade, researching the best combination of tree species to plant on degraded farmland to ensure biodiversity and climate benefits, as well as generating alternative incomes for poor, rural communities.

Is there a ‘perfect’ tree?

The carbon that trees capture is stored in the biomass, and for an average tree, half of its biomass is made up of the carbon it stores. In general, therefore, bigger trees have more biomass and so the greater the quantity of carbon stored.

In an article for inews, Jenny Henman — founder and chairman of Plant your Future – explained that trees grow faster in the tropics, as it’s hotter and wetter with a year-round growing season. She said:

“In 10 years time a silver birch planted in the UK will have a trunk diameter of about 10cm — storing 4 Kg of CO2. But a tree planted in the tropics in the same 10 years will have double the diameter and store a significant 44kg of CO2.”

Read the article in full: Planting more trees can actually save the planet – so why aren’t we doing it?

Research in the Amazon has identified many of the ‘best’ tree species in terms of biomass, and therefore most carbon stored. The results for the top five of these so-called ‘hyperdominant species’ are:

However, finding just ONE ‘perfect’ tree for efficient growth — which is suited to all environments and can also sequester a large amount of carbon — is almost impossible. Different areas of the world have different tree species that grow fast and are good at capturing carbon. But the same tree species don’t have the same benefits in all parts of the world.

So, when asking which tree species actually store the most carbon, Robin Jacobs — a graduate who holds a master’s degree in counselling psychology, with special interests in holistic nutrition and community systems — asks us to consider at least the following:

So there’s a lot of different criteria to consider when deciding on which trees to plant. In fact, Plant your Future has only planted one of the ‘hyperdominant species‘ listed above, as the others are not the most suited to the local situation.

Instead, one of their criteria is to focus on the restoration of endangered species, such as mahogany – which is a big dense precious wood tree – and this strategy has both biodiversity and climate benefits. They also plant fruit trees – like cocoa – which are smaller but can grow in the shade below the bigger timber species.

Why does diversity matter?

Having just one species of tree — albeit one that is highly efficient in terms of growth and carbon capture, and therefore highly effective in combatting climate change — is not ideal, since the resultant monoculture will be detrimental to biodiversity and bio-resilience. A variety of trees — with different levels of growth and carbon capture effectiveness — means that biodiversity can be maintained and improved, while also combatting climate change.

For example, Daisy Dunne, a science journalist writing for Carbon Brief, has reported that:

‘Overall, for each additional tree species, the total [carbon] stock increased by 6.4%.’

She suggests that the reason why carbon capture increases with the addition of tree species, is that different species occupy different heights and spaces in the canopy. A more diverse canopy is therefore better able to capture incoming sunlight.

So, the answer to which tree species stores the most carbon? It is actually quite complex. It depends on factors such as species biomass, the particular environment, and overall environmental diversity. In short, when it comes to tree planting, one size does NOT fit all.

Hannah is a student in the North East of England and this blog post for Plant your Future was based on an Extended Project Qualification (EPQ) she did at school, analysing which tree species are most effective at capturing and storing carbon dioxide.